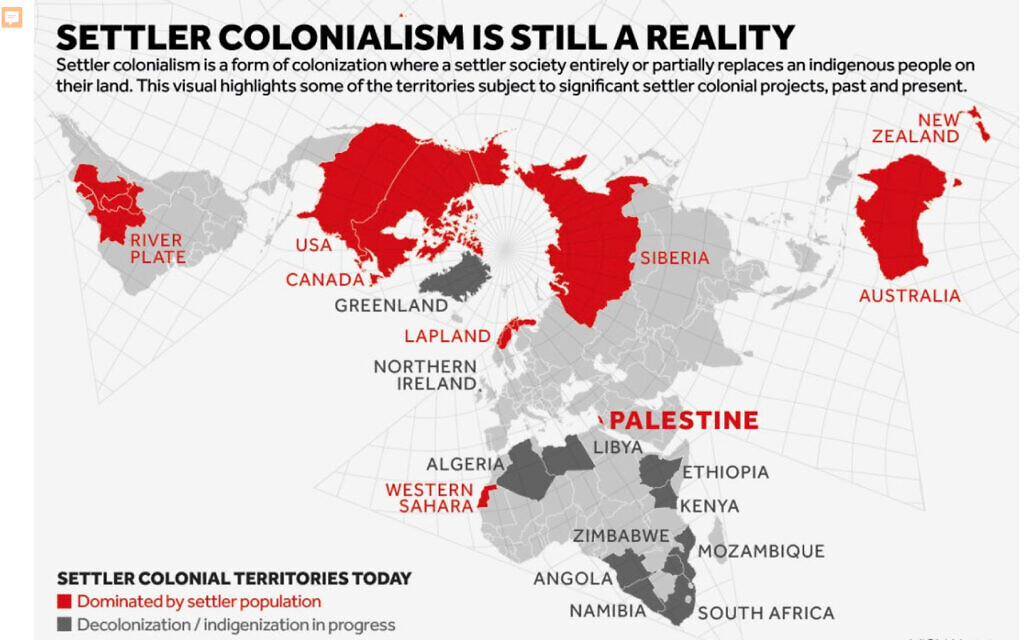 MACQUARIE University has been accused of rewriting history after a slide from a video lecture about Indigenous Australia “wiped Israel off the map”, replacing it with “Palestine” and inferring the Jewish state is a colonial territory.

The slide shows a world map highlighting “some of the territories subject to significant settler colonial projects, past and present”, and includes “Palestine” as being “dominated by settler population”.

A Jewish student from Melbourne, who is enrolled in the course, contacted the Anti-Defamation Commission (ADC) to express his outrage.

Speaking to The AJN the student, who wished to remain anonymous, lamented, “I was shocked that there was such open discrimination against Israel, including wiping it off the map. This signalled a clear rejection of the societal, cultural and historical relationship that Israelis and Jews from across the world have with Israel.

“Marginalising Israel to the point which it ceases to exist and mislabelling the area implies antisemitism. Furthermore, this dangerous pattern of erasing the continuous Jewish history of my people’s Jewish homeland extinguishes my people’s history and connection to the land.”

The AJN asked the university why Israel was omitted from the map, how the slideshow came to be approved, and what would be done to ensure the map was amended.

Stating the unit “introduces first-year students to Aboriginal and Torres Strait Islander people and cultures in Australia”, a spokesperson said, “The map was used to illustrate settler colonialism on a global scale, and to ask students to think about how maps may look different according to the cultures that produce them. For example, the many nations of Indigenous people on the continent of Australia are not represented nor are the many Native American nations of north America.”

The spokesperson added, “The topics of Israel and Palestine were not discussed in this lecture as this unit focuses on Indigenous Australia.”

Noting the “deliberate erasing of Israel” and calling on the university to amend the “tainted” slide which “accuses Israel of being a foreign invader, and rewrites history”, ADC chairman Dvir Abramovich said, “The outrageous accusation here is that the return to Israel and the establishment of the Jewish State is a classic example of colonialism, a claim that delegitimises the Jewish people and rejects their right to self-determination in their historic homeland.”